Warsaw is a huge city, with a huge selection of startup events, meetings, organizations and influencers, as well as such successful startups as recently-acquired Filmaster, beacon producer Ifinity, fashion giant Showroom and Intelclinic, maker of the NeuroOn sleep mask. Here we present some of the best-known organizations in the city, as well as resources for out finding more about the startup community in Poland’s capital.

Visitors that are new to Poland might think that its capital city would be the most organized and closely-knit place in terms of the country’s startup ecosystem. However, it is precisely the size and diversity of the city that encourage fragmentation, as we will see we dive into an analysis of what makes the Warsaw startup community tick.

Warsaw is a place where many groups have formed over the years that, while representing various tech and startup interests, have only now begun communicating and working together in a broader sense. To find out more about the city’s ecosystem, we spoke to a resident and active member of the community, Konrad “.ksy” Latkowski. Konrad is a co-organizer of the first Warsaw and Polish Startup Weekend as well as the #TechWawahashtag, and explained some of what’s going on in the local community.

As the capital of Poland and its largest city, it’s no surprise that there’s a lot going on in Warsaw. The city has one of the best-established and longest-running startup communities in the form of the Aula Polska meet-ups and the Aulery Awards. Started in April 2007, Aula is a series of regular meetings of various branches of the IT community in the city, and promotes the culture of entrepreneurship and networking. The meetings are a place where startup founders can present their projects, new technologies are discussed and collaboration is encouraged.

Over the years, Aula has branched out to include TechAula, which are meetings just for programmers, KreoAula, or meetings for graphic and UX designers, and the Aulery Awards, which are the best known startup awards in Poland. Since 2009, 26 startups or entrepreneurs have received an Aulery, including such successful companies as UXPin(2012), JakDojade.pl (2010), Brand24 (2012), Showroom (2013) and SalesManago (2014). The 2015 winners, announced at the Bitspiration Festival, were Ifinity, Growbots, Semstormand Bartłomiej Gola.

Other events where you’ll find Warsaw’s entrepreneurs include Startup Grind Warsaw, Startup Weekend Warsaw, as well as mixers organized by the AIP incubator and BiznesLink. “The strength of Warsaw is the multitude of events that are aimed at specific industries, not at the general public,” Konrad explained, “mobile meetings, meet-ups for marketing people, as well as a ton of meetings for developers.”

In addition to various meet-ups, Warsaw features several more permanent spots where entrepreneurs can network or receive advice. One example is the Smolna Entrepreneurship Center, where current and aspiring founders can receive mentoring and professional help in setting up their business or searching for funding sources. For individual founders and teams, there are plenty of coworking centers, including the best known, Reaktor (more on that below), as well as ClockWork, Creative Hub, Noa Cowork, pra-CO-wnia, and several others.

The City of Warsaw itself also supports innovative projects coming out of the city. A prime example is the Virtualna Warszawa (Virtual Warsaw) project, in which the city administration worked together with Warsaw IoT startupIfinity to make the city friendlier for tourists and the city’s inhabitants, including the visually impaired. Anyone who enters a government office or private business that’s part of the VW program such as a shop, restaurant or pub will be able to receive information, make reservations, or see what’s on sale on their mobile device – all thanks to beacon technology. Watch a video of how the project, which will be launched within the next few years, will work:

When comparing Warsaw to other cities, however, Konrad was quick to point out some shortcomings: “Looking at it critically, the Warsaw ecosystem definitely has too few startups that have seen global success and are active in the community. We have plenty of cool businesses, but they are rather ‘outside the industry’ – they don’t feel that they’re startups and they don’t see themselves as part of the community – and there’s nothing wrong with that,” Konrad elaborated. However, he added that for a city of its size, Warsaw has very few accelerator programs – though luckily that’s about to change, particularly with the opening of Google Campus Warsaw and its various programs.

While most Polish cities have a single hashtag that represents the community (think #OMGKRK for Krakow or #3Hack for the Tricity area), Warsaw actually has two: #TechWawa and #WarsawIO. While the former is more active on Twitter, the latter has a website that lists all of the regular meet-ups related to the tech and maker scenes, such as Aula, DevOps, Code for Poland, OpenReaktor, Geek Girls Carrots, WJUG, PyWaw and many others. It’s a good place to start when looking for the top events, conferences, coworking spaces and influencers in the city.

The #TechWawa hashtag has been used on Twitter for some time now (and has its own account as well) to document tweets related to tech events in Warsaw as well as news about Warsaw-based startups. The hashtag and community behind it was created by Artur Kurasiński (startup mentor and co-founder of Aula and the Aulery awards), Tomek Snazyk (of startup law firm Cytowski LLC) and Borys Musielak (co-founder of Reaktor).

So which one do you use when talking about Warsaw startups? Both – for now – though as TechWawa has no website at present, Warsaw.io is the place to go for up to date information on the city’s tech scene.

Ok, so you’re convinced that Warsaw is a place worth checking out – but where do you start? We’ve compiled the three best places to find Warsaw startups, three best Warsaw tech events, three great VCs from Warsaw, three accelerators and incubators in the city, and, to break the mold, the one place to start to find out more about Polish startups – the Startup Poland Foundation, based in Warsaw.

1. Reaktor – located in a former mansion in the historic Żoliborz neighborhood since 2011, Reaktor is one of the earliest and most recognizable coworking spaces in the city – but it’s more than just that. “I think of Reaktor as of a community of founders, not just a coworking place for startups,” says co-founder Borys Musielak. In addition to being a home for over 50 Warsaw startups over the years, Reaktor has also hosted monthly OpenReaktor and other networking events.

2. Aula Meet-ups – these regular meetings are where you’ll likely find Warsaw’s IT talent. Over the years, hundreds of experts have spoken or led workshops with thousands of participants, with meet-ups happening monthly. In between meetings, the Aula Facebook page is a good place to keep tabs on the Warsaw tech community.

3. Google Campus Warsaw – opening fall 2015 in Warsaw’s hip Praga district, Campus Warsaw will provide the city’s startup community with coworking and café spaces as well as a central location for meet-ups, workshops and other events that will connect the Warsaw ecosystem with Google’s community of experts and mentors.

1. ICT Summit – Featuring an array of international speakers, the ICT Summit is a major annual event that was held in the National Stadium last winter that brought together Polish entrepreneurs interested in scaling their companies with international VCs and experts in their fields.

3. Bitspiration – Ok, so it originated in Krakow, but as of the 2015 edition the Bitspiration Festival has called Warsaw – and specifically the Palace of Culture – home. Bitspiration attracts experts from both the technology and creative worlds to meet, learn and inspire each other – experts such as Marvin Liao of 500 Startups or Keith Teare of TechCrunch.

1. Protos VC – Backing such success stories as Brainly, Positionly and docplanner.com, Protos focuses on developing startups with global ambitions. The firm specializes in backing startups in the SaaS, e-commerce and lead generator industries.

2. HardGamma Ventures – A seed and early stage fund that was established in 2011, HardGamma has backed such startups as Codility, Filmaster (recently acquired by Samba.tv), Intelclinic and fashion giant Showroom.

3. AIP Seed Capital – This seed fund invests between 100,000 and 500,000 PLN to get a startup going from zero to MVP. Their portfolio features such firms as CallPage, Slidetorial.com and mobile gaming startup Octopuss, and is part of the network of AIP incubators.

1. WAW.ac – a brand new accelerator organized by Anna Walkowska and Andrzej Kuśmierz and funded by the City of Warsaw, WAW.ac launched its first edition in 2015, with a demo day due for October of this year. The accelerator targets startups that are at the early stage of implementation of their idea, with mentors that will help the founders analyze the market, grow the team and find key partners that will enable further expansion.

2. Inkubatory AIP – the AIP Incubatory network is the biggest network of startup incubators in Poland, most of which partner with academic institutions in various cities around the country. In addition to incubating startups, AIP provides seed money, office spaces and hosts tons of startup related events.

3. Startup Hub Poland – a new technology incubator, Startup Hub Poland is a foundation and seed fund that supports early stage startups from around the country. The fund provides preincubation phase funding for chosen startups and supports the growth and development of the project.

1. The Startup Poland Foundation – this foundation was formed in 2014 in Warsaw in order to facilitate communication between the various startup communities of Poland and the Polish government as well as foreign investors and institutions. 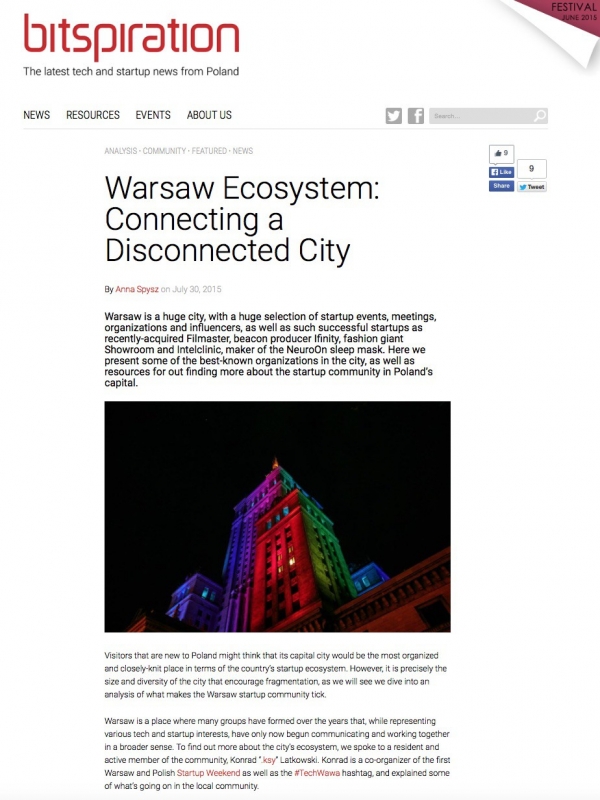